I had blogged earlier about a simple program to allow children to use a computer without any supervision. That program shows alphabet and numbers and lets the child freely explore a keyboard.

A few weeks ago, my son showed an interest in using the mouse. I looked at a few programs meant for children. The best among them was TuxPaint, which can be put into full-screen mode and allows a child to draw using a mouse. However, for my two-year old, Tuxpaint was still too difficult. My son would click on the palette or the tools by accident and it was frustrating when his paintbrush went away, or the color of the pen changed accidentally. Also, the distinction between a left click and a right click was frustrating for him. It took a lot of patience to tell him the difference between the tools, the canvas, the color wells, all the while teaching him to use the left mouse button.

So I learned Qt programming and wrote a very simple program that allows a child to draw using a mouse.  It accepts no keyboard input and treats all mice buttons equally. You click to start drawing and move the mouse to make a free-formed line. The line ends when the mouse button is released. Well, it does accept very limited keyboard input that is difficult to press accidentally. There are a few hotkeys: Ctrl+Alt+t toggles the menu-bar and there you can see the other actions and their shortcuts. Changing pen width and color is supported even when the menu is not visible. You can quit the program using your platform-specific quit keystroke.

The program borrows heavily from the Scribble example in the Qt documentation. As a result, this is a good starting point into Qt programming: the code is easy to understand and modify. As a starting point, you could try changing the initial thickness of the pen.

The source code is on github. You need an environment capable of compiling Qt applications: this is possible for Mac, Windows and Linux. You can run 'qmake && make' or you could load it up directly in a program like QtCreator. I had blogged earlier about Qt Creator, it is a freely available IDE.

Precompiled Linux binaries for 32 bit and 64 bit are available. A precompiled EXE file for Windows is also available. You need to get Windows libraries which are rather big at 20Mb. These libraries have to be kept in the same directory as the EXE file. I don't update binaries frequently. If you can, the source is the best option.

And here is a screenshot of the program in action. It looks like this on every platform. 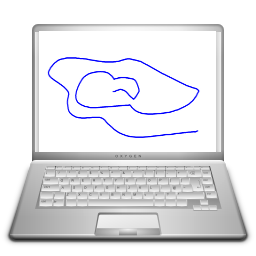