In addition to hacking on Arduino, I am interested in other hobbyist microcontroller boards. One of the more promising ones is the MSP430 Launchpad by Texas Instruments. It is a tiny kit with interchangeable microcontrollers, and it runs great on Linux with an IDE called Energia.  Energia is a fork of the Arduino IDE so it should be familiar to most microcontroller hackers.

One downside to the Launchpad is that serial communication for the board don't work on Linux. The problem seems to be that the USB-serial emulation on the launchpad has a bug.  A person on the forums found that the Launchpad device is requesting a disconnect shortly after connecting. Gerald Stanje has an updated cdc-acm kernel module that ignores these disconnects.  That option works in case you don't mind installing a new kernel module. Also, remember to use the normal cdc-acm kernel when using devices other than the Launchpad.

To use this method, disconnect the jumpers RXD and TXD jumpers that cross the Emulation - MSP-EXP430 line. Then, connect the lines as follows:


Using this, you should be able to communicate with the launchpad. To program it, connect the USB connector to your desktop as before.

This method doesn't require a new kernel module. In addition, this method works with any microcontroller board that can do serial communication: either through hardware UARTs, or through software.

I love Arduino: it is the perfect microcontroller platform. It is easy to program on Linux, cheaply available, there is a library for most anything you can think of. And the community is great for when you get stuck.

My only grudge: The Arduino editor doesn't match up to Emacs.

Yes, the IDE is great, but for large programs I find myself yearning for a C mode, proper indenting, incremental search, buffers. You know, a real editor.

So I experimented with using Emacs and compiling from the console. After experimenting with a few Makefiles, OpenXC works great for me. Clone their project, and set up environment variables according to your setup. I had to change exactly zero variables for their examples to work out of the box on Ubuntu. The Makefile is well documented. You can upload the program to an arduino by doing 'make upload'. This works with simple sketches and for doing everything through a shell script or cron.

It has limitations. It won't do pre-processing: so it will claim that methods or data structures are not defined. It won't work with multiple .ino files. Also, the list of boards is limited, and it doesn't have an easy way to specify Arduino Mini with 8Mhz, which is the device I'm currently hacking on.

This should gray out your editor window. Now, your Arduino IDE is only for compiling, uploading, and for the serial monitor, which it excels at. To save screen real estate, you can make the window short, though it wants to be a minimum height. Now edit it in your favorite editor.

When you are ready to compile, switch to Arduino (Alt-Tab), and then compile (Ctrl-R) or upload (Ctrl-U).

I'm waiting for Arduino to tie in with inotify on Linux and automatically compile when the code changes.  But in a pinch, this workflow gets over most of the annoyances of the Arduino IDE while retaining most of its advantages.

The best approach might be to combine the two above. Switch to an external editor in Arduino, and use a Makefile for automated builds on the command-line. The automated builds on a console will quickly let you know if your incremental edits introduced a compilation bug. And when you want to upload it to your boards, switch over to Arduino IDE.

A while ago, I had developed an application to continuously play music on my phone.  The program is called Sound Sleep and is available for free on the Android store. I use this application every night to play sleep-time music for my child.

This source is great for learning how to program with Android. It demonstrates:

I'm happy to accept patches and suggestions. I have used it daily since March, and it has been rock solid and indispensable.  It has exactly the feature-set I need. Here is a screenshot of the application.  There are two controls: the top half plays music randomly from SDCARD/music/sleeping. The bottom half plays white noise. 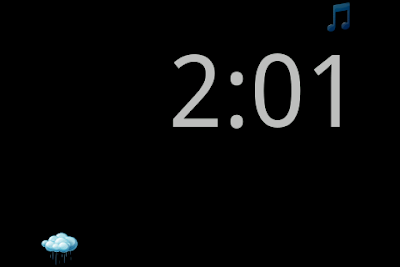 Hacking with your child

Kids want to be involved in adult activities.  This is so fortunate!  My son has started taking interest in my microcontroller devices.  If I could involve him in building some circuits, I get more time to play with electronics. As a bonus, this would give my wife some free time and distract my son from his usual business of hiding valuables and destroying property.

So we set out to build a simple circuit: we chose a blinking lights circuit.  The core of the circuit is the NE 555 chip in astable mode: with a single LED blinking. If you want to do this, follow along. The point of this post is not what circuit to build, rather it is how to build this circuit to keep the interest of a very young child.


The goal: get a 2-3 year-old child to see how a circuit board is built and get the child familiar with some components.

Things you might do differently depending the age and personality of your child: 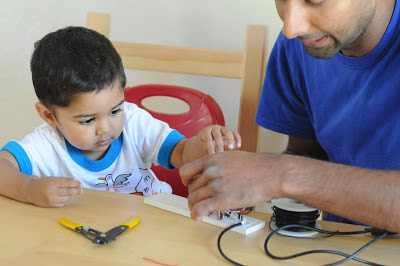 Credit: Many people at work for suggesting projects and giving guidance before I started out. You know who you are. Thanks!

I'm building a remote shutter release for my Nikon DSLR. I'm using Arduino to light up an Infra-Red LED.  There are many libraries that provide the correct LED pulse for Nikon cameras. Unfortunately, they don't often work, leading to time-consuming debugging. So here is the current state of affairs when it comes to Nikon IR shutter release through Arduino.

The library that works

The Arduino Multi Camera IR control by Sebastian Setz. I have version 1-91 of the library. My current environment is Arduino 1.0 that is pre-packaged for Ubuntu (I obtained it through apt-get install). I'm using this on an x86 laptop. Currently I'm using an Arduino Mega for this, though I'll switch to an Atmega328 for the real project. The IR LED is a 940nm component I bought many years ago.

I mention this in painful detail to illustrate everything that was under suspicion when the project didn't work out. The sample code involved is trivial.  But when things don't work out, debugging can get quite involved as you check every thing methodically.

The library above is the Swiss-Army knife of shutter control. Not only does it work with Nikon, but it also works with other, lesser known brands. Minolta, Sony, Pentax, Olympus, even obscure brands like Canon.

The libraries that don't work

Von Roth's Nikon library:  I had used this in the past with one of my Arduino boards and it had worked on the first try. So this was the first library I used. I was disappointed when it didn't trigger my shutter. I thought the culprit was the IR LED, since it had sat in the bottom of a parts-box for a few years, and looked rebellious at this mistreatment.

Lady Ada's intervalometer code: Given the considerable reputation of Lady Ada, I was certain that this code would work. But I couldn't get it to work, again, leading to more unjustified suspicion heaped on the IR LED.

The debugging was fun, though only in retrospect. To test whether the LED was working, I pulled out my baby monitor and verified that the LED was indeed emitting some Infra-red. A few Arduino boards were swapped, I switched from x86_64 to x86, I switched to the old installations of Arduino.

Hope this saves you some effort. 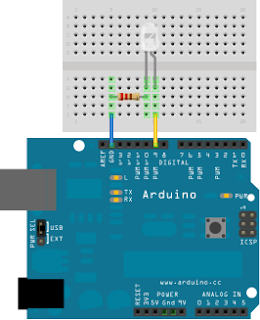