Merle's Door is a fantastic book about a man's relationship with his dog, a lovely description of the outdoors, and a rethinking about man-pet relationship. Read on to find out why.

I read Merle's Door because my wife loved it, and highly recommended it. It starts out promisingly with a story of how Ted found Merle and how they had to adapt to life together. It goes on through Merle's life and passions, and how Ted and Merle became one cohesive group.

A few ideas stick out from this book. I'm not sure these are new ideas, but this is the first book I found them. The first is the remarkable camaraderie between Merle and Ted. Not only do they enjoy each others company, but they also have a more understanding relationship.  The book is written from a dog's perspective as much as it is from a human one. At times this can get laborious as numerous online reviews point out. I understand the human urge to dislike Ted foisting human feelings on his dog. There were places where I wasn't sure what Merle was feeling and it felt excessive to force his feelings on the dog. But all writing employs some amount of guesswork of others' feelings.  In total, the portrayal was delightful and refreshing.

The only part which dragged on was Merle's last few days. Ted has written it as a painfully detailed diary, which was too painful and too detailed. I wish this section was concise, but I'm sure other readers love the detail.

This book also makes you think about the life of a dog in the city. Ted's dog had a large area he could run freely in, which is very different from most domesticated dogs. Illustrating from examples, Ted shows why a dog would be miserable in a confined area like an apartment, even if it had a generous yard.

If you have ever enjoyed playing with a dog, get this book. This will give you a fresh new perspective on what a dog's life must be like. 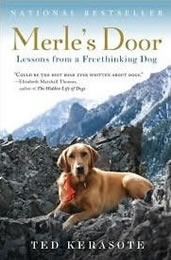