In order to fight off murderous tendencies while doing taxes, I play video games. This year, I played one game on my Android phone: The World of Goo.

Wikipedia claims that this is a physics-based puzzle game, but that is as accurate as describing chicken tikka as a dead bird. The World of Goo is a brilliant adventure game, told through many levels that involve tiny balls of Goo. The balls start out sticking together, and new levels add interesting capabilities. There is a single objective in every mission, usually collecting a fixed number of Goo balls towards a pipe. (To be fair, Wikipedia has a scary long page about the game. What they lack in humor, they make for in actual content and facts.)

A few years ago, I was saddened by the lack of inventiveness in new games. It seemed that every game was about the same boring plot: there were certain genres and everyone stuck to tried and tested mechanics. Walking through the aisles of a computer store, you could quickly categorize each game into a few genres: RPG, strategy, platform, with little that set the individual games apart. Compared to this, the early days of gaming were filled with creativity as programmers experimented with computers to create something fun and unique.

That wasn't the only problem. I use Linux and many games do not work on my system. Even when had the luxury to install Windows on one partition, games required registration codes and other fiddling just to get working.

In such unhappy times, I came across the demo for World of Goo. There was a Linux version, and I played one level or two and loved the idea behind the game. The game was refreshingly new, with goo balls sticking to one another and making cute sounds when they reached the destination.

For one reason or another, I put off the purchase and then promptly forgot about it. A few weeks ago, I finally bought the first Indie bundle on Android and downloaded my copy of World of Goo. It was as refreshing and enticing as I remembered it, and so I installed it on my Android phone.

Tax week was a whirlwind of administrative paperwork and an ill baby. In between copying numbers from one dull form to another, I was holding my child as he slept clinging to me. My hands were free, but I wasn't coherent enough to do anything productive. My phone was nearby, and the opportunity was perfect for the World of Goo. After a few hours over many days, I finally finished the last level. And I cried because I had no more goo world to conquer. That's how good the game is.

The game has exceptional level design. Most game developers fall in the trap of coming up with a single idea for a game: developing the engine and then churning out levels one after another. In such games, the fun dries up quickly after the first few levels. The game gets devilishly hard and the levels just get tougher. New levels are more challenging, but no more rewarding. Level two is level one, but with less time and fewer resources. That's not fun, that's a chore. In Goo, you go through different scenarios, changing weather and different kinds of goo balls. The game mechanic changes as you tackle new levels. This reminds me of Soul Bubbles for Nintendo DS, which had the same change of mechanic as the game proceeded. I'm glad the developers resisted the urge to copy-paste levels. I'm glad they spent as much time in innovative levels and level mechanics as they did on the creativity of the engine. The levels are inventive, they keep you eager to see what happens next.

As the game proceeds, the story of the goo balls unravels and takes the player through its strange and  humorous turns. World of Goo does a lot of things well, and is an instructive lesson to the cesspool of current-day gaming.

The game is half a decade old, but is well worth playing. 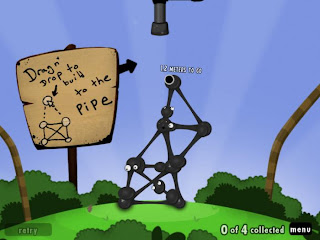 What is inside electronic devices?

Not many people see the insides of electronic devices. Here is a picture of a Linksys E-1200 router: 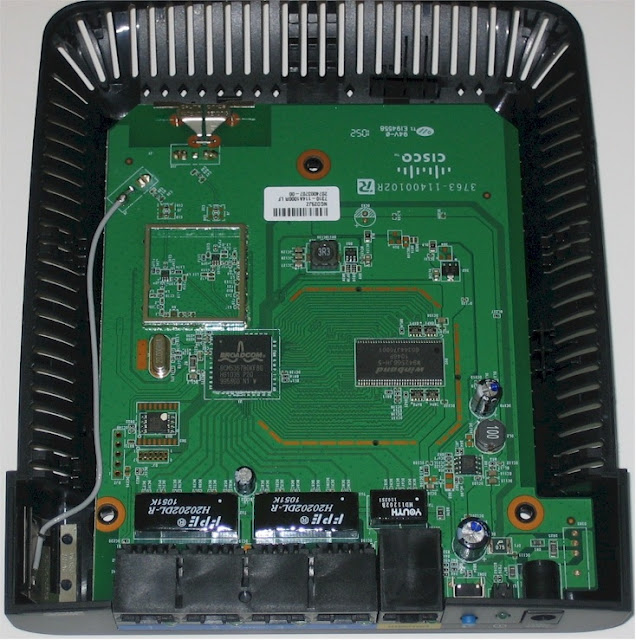 If you compare this with electronic boards made a decade ago, the emptiness of the board would strike you immediately. Most of the board is empty space and two black chips dominate the real estate. The remaining components are minor: resistors and capacitors.

There are two big black chips in the center of the board. In order of appearance from left to right are:
The fat black things in the bottom look like chips but they are not. The FPE 2020 are tranformers for electrical isolation of the ethernet signal.

Everyone knows that computers getting faster, smaller, more durable and more cost efficient. The silent revolution is in the ubiquity of computers. Tiny computers are everywhere. The desktop was once the only computer in the house. Then came along the laptop, then the smart phone. Then your television set-top-box. Routers, ebook readers, the telephone box to give you cheap international calling. Deep inside, all these devices are empty boards like the one above. One powerful chip containing a computer to do everything.

The other important fact is that these are a full, general-purpose computers. You can run browsers, games, and email programs on these computers. Manufacturers make a board with a general computer and then write router software for it. This method is cheaper than creating a specialized router-only computer. A router is very similar to a television set-top box: they both contain roughly the same parts. The only difference is in the software.

We are getting better at manufacturing these full computer chips: they cost less, last long, and fail less frequently. It is not unusual to run these computers constantly for years. This astonishing reliability is one reason why the repair industry is dying. The other reason is that there isn't much left to repair. Boards contain few parts, and if a CPU or RAM chip goes bad due to overheating or electrical surges, it is nearly impossible to repair it.  And capacitors and connectors fail much more often than CPU and RAM chips. Since there is nothing mechanical left to fail, and the failure rate of silicon components is low, electronic boards provide decades of service.

Another trend to notice is that many of these devices run Linux. Linux has many benefits: it is free, it has support for a wide variety of these new computers, and it is easy to modify.