I was navigating through a large Java project today, and I needed some source tools to help me visualize the massive class hierarchy. Looking on Google didn't produce anything obvious: people pointed to eUML2, which was difficult to install, and some tools didn't generate UML from existing code.

After a while of searching, I remembered the Doxygen utility which writes documentation from source code. It works on C,C++, and Java, among many other languages. While its diagrams might not be perfect, they were very helpful for C++ projects in the past.

So I decided to give it a shot. It worked out beautifully.

Here are the steps involved in generating UML diagrams.
First, you install doxygen (to parse the files) and graphviz (to write out PNG of graphs)
Then, run doxygen to generate a config file.
Now you have a config file called Doxyfile. Edit this to allow recursive searching, to look for java source, to generate call graphs and to generate pictures, and to generate UML style diagrams. Here are all the changes I made to this file.
Now, generate documentation with this command:
To test this out for a blog post, I downloaded the source code to Azureus, a large Java-based project. Here is a graph from one of the files. The top right shows a close-up view of a tiny section of the picture. Even in this simple example, you can see how a zoomed-out view allows you to understand the complex structure. 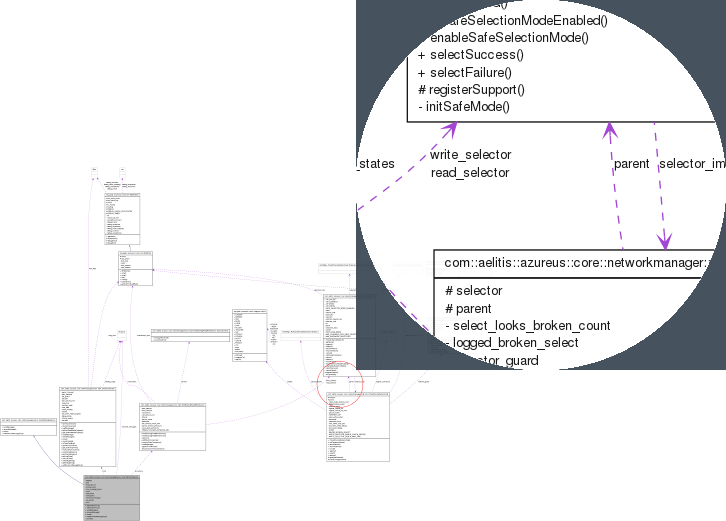 Doxygen reads code written in C, C++, Java, and many other languages. So if you are in need of UML style diagrams to better understand a class hierarchy, give it a try. It is freely available, easy to install, and easy to use. In addition to class graphs, it can also make call graphs and caller graphs.
Posted by Vikram Aggarwal
Labels: hacking
Newer Post Older Post Home