Few people know that Apple releases the source code for many components of their MacOS software. Many are surprised when they hear it.

Apple has a full site for their open source releases. Their most recent Mac OS release is for 11.0.1 (Big Sur). Not all source is released. There are the usual UNIX utilities: Perl, Python, Bash, and userland tools that make a functioning system. Functioning, but not always updated, as Apple doesn't always track the latest versions. They still ship Python 2.5, and other tools can be many years old. This is why you need to get a functional, bugfixed UNIX userland with homebrew or other tools.

The most interesting source there would probably be the kernel, called XNU. It is a combination of Mach, a microkernel, and BSD, a monolith. There's some Solaris code there, some Joyent code, some Sun code, NeXT, UC Berkeley, Carnegie Mellon code, and of course, Apple code.

Apple does have an official github profile, which also hosts xnu. But it was last updated two years ago, and stands at version 4903, while the latest version is 7195.

Their open source browser is passable but doesn't show every file properly. I find it much easier to read through code using Emacs so I pulled it into a github repository if anyone wants to clone it or browse it online. 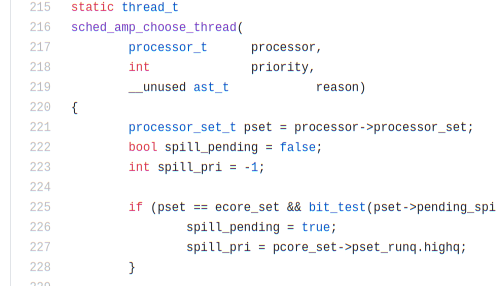