I had blogged earlier about using the Android Open Source Project (AOSP) to learn about the Android framework, and help debug your Android applications.

I missed out how easy it is to do this through IntelliJ, the other popular IDE.

IntelliJ is an IDE that was released in 2001, and has boasted an impressive feature set. It started out as a paid product and a community edition was released in 2009, along with source code licensed under the Apache License 2.0. A commercial version is still sold, and that includes enterprise support. For an Android developer's perspective, the community edition is a great product to use for all Android development. This post shows how to get set up and start debugging your project with full cross-references into the AOSP framework code.  This is a great way to learn the intricacies of the framework.

Android development needs a Java Development Kit installed on the device. I choose to use Sun's Java 1.6, but you are free to use any JDK of your choice. 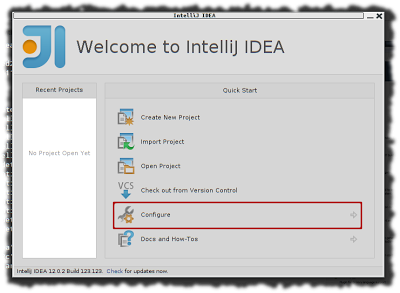 Configure -> Settings -> Project
It will say "No SDK". Click on New and select the path to your jdk. This is probably in /usr/local/sun-java-1.6, or somewhere else.

Create a new project on the previous screen.

On the following screen, create an "Android Application Module" and set the location of the Android SDK:

The project name doesn't much matter. You could create a Hello World project for the purpose of this guide. After clicking no "New", you need to set it to the path of the Android sdk, which is the location where you expanded the Android SDK zip file: ${ANDROID_SDK}.  You can change this setting later under  Menu bar -> File -> Other Settings -> Default Project Settings -> Platform Settings SDKs -> Project Structure.
This can also be set on a per-project basis. However, you should never need to change the SDK location. Instead, you can change the Build Target to the version of Android you wish to support. A single SDK location can hold multiple build targets (Starting from the earliest version of Android all the way to the latest.

At the end of this, you should have a Hello World Android project. IntelliJ supports looking up code sources if you have downloaded the sources with the SDK. To verify, run ${ANDROID_SDK}/tools/android
Select the sources for the Android build targets you need.

At this point, you are ready to debug using the framework source. Highlight any framework code (like Activity, or Context) and hit Ctrl+B. It will take you to the source for that class. Sometimes documentation can be vague, and the definitive word is the source. You can also use the source to learn how canonical classes like ListView or DialogFragment are written. Looking at framework code is a very powerful way of learning good coding practices and system paradigms.