Srinivas Ramanujan was a brilliant Indian mathematician who made seminal contributions to Number Theory and the theory of continued fractions. Robert Kanigel's book, "The Man Who Knew Infinity" is a biography of Ramanujan.

The book talks about Ramanujan's life in quite some detail. Robert has provided a lot of color by traveling to the places involved, and deeply researching Ramanujan's life. The book has photographs of the places and maps of areas, making it easy to identify with the story. The biography is well balanced and impartial. If this was all the book contained, it would already be a worthy read.

What I found most interesting was the associated commentary on Indian society, values and the education system. Ramanujan was ignored by the Indian education system, largely because he refused to conform to its requirements. Ramanujan showed an early brilliance in Mathematics. But the system didn't care for exceptional performance in one field. Due to the inflexibility of the system, the talent of a brilliant mathematician was wasted. Having suffered through the Indian education system, I found the passages revealing. Even back in Ramanujan's day, the system was inflexible and idiotic. Many people recognized the inflexibility of the system, its arbitrary outcome, and the ill effect on genuine talent.

How much part did Indian society and customs play in Ramanujan's downfall? Ramanujan refused to alter his diet in cold, cloudy England. As a result, he got very little vitamin D, and suffered poor health. This is a problem that persists to this day: Indians who firmly adhere to a restricted diet suffer from problems in countries where an Indian diet is unsuitable. Ramanujan's wife was poorly treated by his mother, and this poor treatment led to misunderstanding and stress in Ramanujan's life. Would the outcome have been different if the Indian arranged marriage was not as stifling?

Ramanujan's life is full of questions. It makes me sad at the outcome. But more importantly, it makes me wonder.

Would a Ramanujan be possible today? Could a lower middle class boy with no talent for anything other than Mathematics be recognized as a genius? Could he even reach a point where he could seek collaboration or patronage from Western mathematicians?

It is a very sad tale, though one I think every Indian student should know. Indian students yearn for exposure to foreign education and worldwide recognition. This is one example of a person who got both, and yet he had a sad and lonely life. The outcome could have been so much different. Ramanujan was as good as Euler or a Gauss, according to people who worked with him. And yet his talent was squandered away. An early death, a lonely life full of struggle. And Ramanujan was lucky. Today, he probably would have no hope of success. 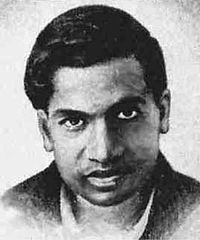